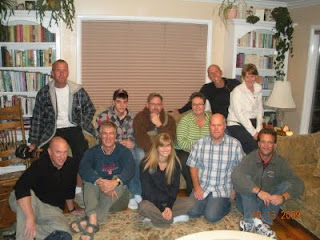 October 2009 Team Photo
Hello,
This is Chris again, not Mike. Someday we will have internet in our orphanage and be able to communicate from there. But for now Mike calls me. They started the trip with plane delays but did manage to arrive in Port-au-Prince at the scheduled time, which is very good. They arrived at the orphanage last night around 11:00 pm, and were up early this morning ready to go. Their plans were to put rafters on the first phase of our orphanage building and a metal roof. They had a change in plans though. The source we had for wood is no longer available. So after much delberation and prayer they will be putting on concrete roofs. I think in the long run this will be better. Metal roofs get very hot in the sun and make the rooms very hot as well, and it is already too hot in Haiti. The concrete would hold up better in hurricanes, and would allow more rooms to be built on top if we needed them. The down side is this will be a more expensive choice. But God is in control not us and He knew what the team would be facing when they arrived. So they are spending time with the children today and this evening will be forming up for concrete roofs. As I was talking to Mike today, I could hear the laughter of children in the background. A sound I love. The best birthday gift I received this past June was a call from Pastor Nathan, as I was handing over the phone to Mike he said no wait, and I could hear him talking to someone in the background, then all the children were yelling happy birthday to me. It was wonderful. Well that is all the news for now. We would appreciate your prayers for the roof building to go smoothly and for health, safety and unity for the team and orphanage. But even more than that for lasting relationships to be built and for lives to be spoken into and changed and passions birthed. Blessings and many many thanks, Chris