Hello,
Today the team mostly stayed in the children's village. Kathy and Brenda worked in the kitchen with the cooks again. The guys worked more on building the playground. Mike, Jay and Brenda each shared with the staff some of the different aspects of our child safety program. They also taught the children some more about respect and appreciation. One of the highlights of the trip is being able to share a new food with the children and staff, something we eat in America or Canada.
For this trip Kathy made gingerbread boy cookies and bears at home. Then they decorated the cookies in the Haiti. They went over well.
Since the team did not go to Perou today, they will be going tomorrow morning. Mike, Jay and Brenda will also be teaching the staff again tomorrow. Please be praying for understanding. Thank you again for your prayers, they are appreciated.
Blessings,
Chris
0 comments

Hello,
The team had a great day today. They went into town for a couple of hours. They purchased the steel needed for the swing set. They also visited the school in Poteau and spent time playing with the children. They passed out candy and the children sang for the team. Later, Kathy and Brenda spent time in the kitchen helping the cooks. They had a lot of fun and all of them learned some new things. The team picked up the bibles today. I have been told that I will get photos tomorrow, if I do I will post them.

Later in the day Nathan, Mike, Jay and our translator went back up to Pass Rien for another evening celebration. The evening was interesting to say the least. The celebration was held in one of the families home, so picture about 200 people gathered together in the yard of a mud hut. Nathan brought a portable sound system and lights with him. Nathan led worship and Mike taught. A man heard the worship and thought is was a party or a disco as they call it. When he asked what was going on Nathan called him and asked what he wanted. He ended up giving his life to the Lord. There were 6 salvation's tonight and lots of people came forward for prayer.

One man shared his testimony, he said he was part of a witchcraft group and he had thought it was like family for him. He said his eyes were opened and he gave his heart to the Lord and now he realizes he has a new family, a family in the light.

While Mike was teaching, Nathan thought he saw something out of the corner of his eye. So he went over by the woods and looked around. There were 4 witch doctors hiding in the woods. They obviously were trying to stop what God was doing. Mike and Nathan were told that a couple of weeks ago, two men showed up in church that were strangers to the village, they came to check Nathan and a friend named Shalam out. Some in the village did not think they were very good men. It turned out that they were hired by the Madam, the witch doctor that some of you have been praying for. She hired them as hit men to take Nathan and Shalam out. After church that Sunday the two men went up to Cap Haitian, but evidently some deal they were part of in the Dominican Republic went bad and they went back to the Domican Republic, and were killed.

I share these stories not to scare anyone, but to share with you just how much prayer is needed. It is so important to keep praying. The area of Pass Rien has a higher population of witch doctors then a lot of other places. The village of Pass Rien has been under the Madams thumb, and under Satan's for generations. Prayer has broken through, and even witch doctors are coming to salvation. In Luke 4:8 God says: The Spirit of the Lord is on Me, because He has anointed Me to preach good news to the poor. He has sent Me to proclaim freedom to the captives and recovery of sight to the blind, to set free the oppressed, In the village of Pass Rien captives have been set free, the blind from birth have seen and the oppressed have been set free. God's word says when the light comes darkness has to flee. Nathan and Mike have been teaching how important it is to separate voodoo and the church. And not to go back to the darkness, but to stay in the light. Please keep praying for the village of Pass Rien, for discernment and protection, also that God's light would burn brightly.

Tomorrow the team will go to the village of Perou and spend time giving the gift of bibles. Please pray for them and the people of Perou.

Thank you so very much for your prayers. We greatly appreciate them.
Blessings,
Chris
0 comments

Hello,
Today the team worked on laying out the area for the playground in the children's village. They also dug the holes for the steel posts, which is quite a job. Our friend Neil, who works for Washington state agriculture, and who has come to Haiti twice to do soil testing, remarked "what soil" when he first saw it. In Marose the soil is more like rock with smaller ground up rock. It is so hard and packed it is almost like digging concrete. So digging the post holes was quite an accomplishment.

The team also spent time with the children today and passed out the children's gifts to them. Then in the evening the team passed out glow-sticks. The children love the glow-sticks, usually a wild game of chase and capture breaks out once the glo-sticks are given out. The team usually gets quite involved in the game.

Tomorrow the team will go into town and get the steel posts for the playground. They will also get to spend some time in the market. The team will be hiking up the mountain tomorrow for their devotion time. And one of the exciting parts for tomorrow will be the delivery of the bibles for the new believers in Pass Rien and for the youth group in Perou among others. These are the bibles that you purchased for Christmas. They are written in their language and are nice durable hard cover bibles.

Thank you again for partnering with us in prayer.
Blessings,
Chris
0 comments

Hello,
The team arrived at the children's village last night and settled in. Nathan said that the village of Pass Rein was expecting the team for Church in the morning. So they traveled up to Pass Rein this morning, Nathan lead worship and Mike preached. Mike said church was amazing. There were about 250 people from the village that went to church. They did not all fit in the tent they use for church, which is one of those long military style tents. They opened both ends of the tent, there were people in the tent and outside of the tent and all around the tent. There were 9 salvation's and about 150 people came forward to be baptised in the Holy Spirit. They had a meeting afterwards with the leaders to encourage them to disciple and mentor the people. The team said it was so cool being in church this morning, the church was exploding with the Spirit of God. They also visited the woman whose house burned down. Some of the village men are helping with the labor of rebuilding it. The team was also shown a new piece of property that has become available for the church. At some point the church would also be used for a school. It has mango and coconut trees on part of the property and is available for a very reasonable price.
This evening the team went to our church in Marotte, for a celebration. Nathan led worship and Mike taught. The church had a potluck, which is unusual for Haiti. They also had a men's group sing and a women's group sing. Mike said he shared the same message in the evening as he shared in the morning in Pass Rein. But the response was so different. The atmosphere seamed very heavy. The team felt like there was a lot of spiritual warfare going on. So the team and the church leaders got together and prayed and something in the spiritual realm broke. At one point Mike felt like he received a word from God for the leaders and he looked up towards the front and realized that the pastor and his wife, the youth pastor and his wife and all of the leaders were in one area. He with them the story about Jesus telling Peter that "on this rock I'll build my church, and that He would pour out His Spirit on them." The leadership of the church was like Peter "the rock" and they would be the foundation of the church. Then God did pour out His spirit on them. The team summed the day up by saying there were huge spiritual victories today. Praise God He is wonderful!
Tomorrow the team will be starting on a playground in the children's village. This is a project that has been on many hearts and will be a joy for the children's village. The team brought some of the playground parts with them. Please pray that they are able to find the rest of the parts in town tomorrow. Please also pray for the team as they spend time with the children and staff tomorrow. Thank you for your prayers.
Blessings,
Chris
0 comments 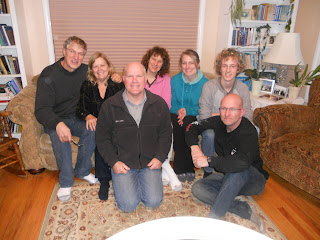 I am writing to let you know that the January team has left for Seattle and will be flying out tonight. Please pray for a safe and fruitful trip.  Also please pray for our family as this was moving day for Mike, he will not be coming back with the team. Today was his last day stateside for a while. I will be following him with our youngest three children in February. Our second oldest son Dustin and his wife Melissa will be moving into our home and running things stateside. You will still be able to connect with us via e-mail. The ministry phone number will reach Dustin and Melissa. So if you need anything, have questions, want to drop off donations or sponsor gifts, you will still be able too. Mike plans on making trips back to Washington to stay connected with you. He will also be back for speaking engagements and conferences periodically.  We want to thank all of you who have been praying for us as we make the transition to Haiti  full time. We really need and appreciate your prayers.