I just got off the phone with Mike. He was in an area where there was no cell phone coverage. Glad to make contact with him. Pastor Kim from our church is with him on this trip. I guess Kim has fully packed every minute. Mike said it was like having me on the trip. There is so many needs and and time is so limited that I always feel like every second counts when we are there. Any way they are doing well. He said our Pastors association around Gonaives and Marose has grown now to almost 50. They had a teaching time with Kim, Mike, Philip and Deojon(spelled wrong, but I have no way of getting the correct spelling right now). Afterwards the pastors from our association prayed over them and Mike said it was awesome. The holy spirit was definitely there.

Tomorrow the team goes to Deojon's church in Port-au-Prince and each one will share his or her testimony there.

We have a huge praise report from here today. Two girls from our church, Naomi and Aumony put on a walk -a- thon called "Water for Life". It was geared towards children, we walked from the church to Lynden city park. The purpose was to raise money for the well and water system for the orphanage. We would like to drill for a well that is deep enough to be safe with filtration and provide water without running out. We also would like to put a 2000 to 3000 gallon holding tank on the hill above the orphanage, that would receive water from the well via a pump. Then through a water pipe system we could provide running water by gravity that would feed the kitchen for cooking and washing and also provide water to our future boys shower and toilet room and girls shower and toilet room. The church through a" give your best garage sale" raised just over $6000. At the walk -a- thon today they raised $8000. Mike knows the figures better than I do, but this is pretty close to what we need to accomplish our goal I believe. Praise God !!!!!!!!!!!!!

The team will be traveling home after lunch tomorrow and should arrive home sometime Monday afternoon. Please pray for safe travel. Thanks sooooo oooooo much. Blessings Chris
0 comments

What's up in Haiti

I talked with Pastor Nathan today. He said the teaching time for the pastor's association at our orphanage went well, as did the children's activities. Thank you for your prayers.

Mike also shared a praise report. Ben, the driver for the last trip whose daughter was healed, had asked for prayer because he did not like his current job situation. When he returned to work, after driving our team around while they were in Haiti, he was let go from his job. He then found a different job and loves it. He says this is a result of praying with the team. He is happy and God gets the praise!!!!!!!!!!!!!!!!

I should hear from Mike again tomorrow. I will send another update if I do. Thanks again for your prayers. Chris
0 comments

Hello
Thank you for all your prayers. I heard from Mike. They had a pastor's conference for
Haitian pastors today. It was very good. Tomorrow morning they leave for our orphanage in Marose. They will have about 3 hours driving time. So please keep them in your prayers. There will be a teaching time for the pastors association that Mike and Nathan have started near our area. There will also be some vision casting. Mike has some activities planned for the children too.
Should be good. Please pray for safe travel for all of the pastors in our association along with our team, and for our vision to be caught. Also for the children and those interacting with them to be blessed. Thanks and Blessings Chris
1 comments

WOW, the last trip was great. We had a good team and we had several significant events that really made the trip worth while. Everyone got home safe and sound, ( although some of us were delayed an extra night in Miami ). We spent more relational time with the kids, They absolutely loved it. Gin really put her teaching skills to work with several projects for them. And can you try to imagine how you might feel if you had been adopted out of Haiti as a child, and then went back to minister as a young woman. For Kiana and Sonize, this was a real special insight, one they won't easily forget. Becca got the medical clinic ready to open, all we need now is a doctor and a sponsor. We saw miracles,healings and the team really got the vision for the ministry. Thanks so much for your prayers. I leave on Sunday to help with a Pastors Conference in PAP, then to show a team our ministry in Marose, then up to Tricotte. I know that I have probably asked too many times, but the power of your prayers is significant to the work that God is doing. ...........Thank you again..............Mike
0 comments 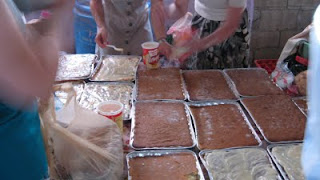 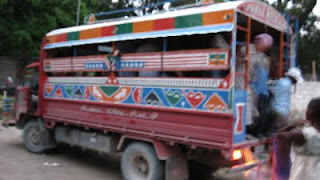 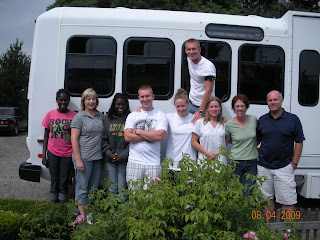 Our Tap Tap for the week!

Thought we'd upload a few photos now that we're home safely! Thank you for your prayers and support! There will be more to come!
~Lelands~
1 comments

Hello again,
I talked with Mike today. I guess they have been doing some VBS every day and the children are loving it. They finished up making the
chalkboards today. Early tomorrow morning the team will start heading to Port-au-Prince, and then home. It's about a 30 hour trip from the orphanage
to home. They are supposed to fly into Seattle around 9:30 a.m. on Wednesday. Mike has yet to come home from Haiti and have all flights work.
He either has delayed flights or broken down planes at each airport. So the team would love prayer for traveling. The ride to Port-au-Prince has become worse each trip, due to road damage from the hurricane last fall, that they were stuck in. He says that people have remade the road by driving off of it where ever huge washouts are left from the hurricane. There is no government road work done in Haiti for the people. So that trip is pretty hard.
Mike shared with me a great praise report. When they travel to Haiti, Mike hires a tap tap for the time they are there, as no one in the orphanage has
a vehicle. Tap taps are usually small pick ups painted as wildly as you can imagine and you hire them by taping (really banging) on the side. In this case
it is a huge tap tap. They look like huge flatbed trucks with built wooden walls or railings for sides and some kind of covering over the top, some times.
They are totally painted out. Anyways they hire the same driver for the whole time also and he stays in the church with the team. So Mike noticed that
the driver was not very happy looking and sitting outside on the porch of the church. So he talked to Benjamin (the driver) and found out that his wife had called and said that their daughter was very sick and throwing up blood. So Mike said let's go get the team and pray together. So they prayed and two hours later Benjamin's wife called and said their daughter was totally healed. Praise God!!!!!!!!!!!!!!!!! So again thanks for your prayers.

I talked to Mike and the team today. They are having a blast. The baptism was smaller than they thought it would be, but was really fun and special. Three of our older boys in the orphanage choose to be baptized also. The team had a lot of fun baking the wedding cakes and cupcakes. They also enjoyed the wedding and said they took lots of photos. They have done a lot of stocking of the medical clinic. Tomorrow and Monday they will be making chalkboards and doing VBS with the children. Mike has an interview with a medical doctor that will work in our clinic part time. So he would like prayers for that. The team will go to our church in Marose during the morning and another church in the evening. We have 5 new children in the orphanage. So now we have 40. Three of the children are the children of our cook that passed away earlier this year. Two others are children that Nathan thought needed help. So we have 5 new children to be sponsored. Thank you so much for all of your prayers. Chris
0 comments

This is Chris writing this time. I heard from Mike and the team in Haiti today. The team is doing well. He says some of the women would like a few less bugs and a little less heat. They unpacked medical supplies today and spent part of the day playing with the children. Tomorrow they have a meeting with area pastors. Also they are baking cupcakes and a wedding cake in a bread bakery run by a fellow missionary. I believe this will be the first time ever these children will have had cake or cupcakes (complete with sprinkles). Should be a lot of fun. Our daughter and Pastor Nathan's sister will also be altering wedding clothes my daughter brought down for a bride and groom. Mike brought the groom to the Lord on his last trip and after Mike had left the groom told Pastor Nathan that he thought he should marry the woman he was living with. Nathan told him to wait till Mike came back and they would perform the ceremony. So Saturday evening the team will celebrate a wedding. Saturday morning will be a baptism of about 60 people that the team helped bring to the Lord on a previous trip. This will take place in the river behind the orphanage. The cupcakes and wedding cake are for those two celebrations. On Monday they will go to Gonaives one of 3 or 4 of the largest cities in Haiti. In Gonaives they will be helping another missionary with his daily feeding program. They will help feed about 250 children. So they have some full and exciting days head. Thanks so much for your prayers.
0 comments