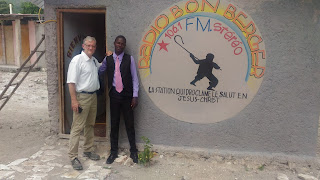 Rusty and Joel in front of our radio station. 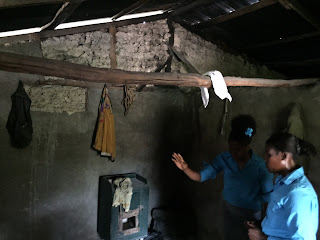 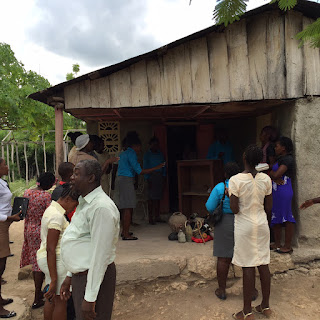 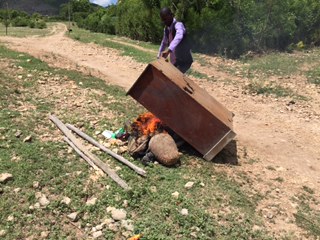 Burning some of the things used for voodoo.

The rest of the story...

This morning I went to Pass Rein with the team. It was a good service, Rusty preached, Nathan led worship and we had communion. After church Rusty and the team wanted to visit the radio station so Joel, one of the leaders in Pass Rein, who also oversees the radio station, walked with us to the radio station. He shared with us that they have people call in every day and ask for someone to come to their house and tell them how to accept Jesus. This is wonderful news, but I had not connected the dots to particular stories yet.

We walked back to the church and Nathan shared that the Boko I had written about last night, the one who had shared that his powers with satan were less than God's powers, wanted the church to come to his voodoo house and witness him cleaning out his voodoo paraphernalia. So off we went with a group from church. When we arrived the church started singing worship songs. Then Nathan asked some of us to go into the voodoo house and pray with him. So we spent time in prayer as the man removed all the the voodoo items from the house. The witch doctors, or boko's themselves are the ones that remove the items, then the items are set on fire, creating a bonfire that neighbors ask about, creating an opportunity to share Jesus with them also. Everyone continued to sing worship songs and we prayed over the man. When someone makes this kind of conversation it changes their whole life literally. Which women and which children does he commit too? How does he make a living now? If the rest of his family or relatives do not accept Christ (like at least one of the women today) he faces anger and rejection from them. The community will also see him in a different way now, will they trust him, believe he has truly changed? His previous companions will reject him. The list goes on. Prayer changes everything. Please pray for him his name is Lelson (spelled wrong, but that is how it sounds).

Then as things are coming to a close, Joel tells me that this particular boko heard about Jesus from our radio station. That is how we connected and he knew about our church. I told Joel I would loved it if he shared more stories like this with me, so that I can share more of the whole story with you. Nathan than said that just down the path there was another man who wanted us to visit him in his home and he wanted to receive Jesus into his life. As we are walking along Joel shares that this man also had heard about Jesus through the radio station. When we arrived we realized that this man had a broken leg and some other injuries, we prayed for healing and then Rusty led him to the Lord. Joel then shared with me that this man had been in a motorcycle accident and because he was laid up in bed one of the few things he could do was listen to the radio. He happened upon our station and the Lord touched his heart and he too had called in and asked for someone to visit him and help him give his life to the Lord. And that ... is the rest of the story :)

It has been a great day so far and the crusade has not even begun in Myan. Excited to see what God will be doing tonight during the crusade. Please pray as mountains are being moved, lives are being changed and communities are being transformed. Thank you so, so much for coming along side of us and helping the people of Haiti.

The team is here and doing well. Thank you so much for your prayers. They arrived late Tuesday evening during a rain storm. They settled in and spent the following day with the children in our Children's Village. On Thursday they went to the open market in downtown Gonaives and then in the evening to bible study in the Perou church. Both Kirsten and Carrie sang a few songs and Kirsten played her ukulele. On Friday they helped us to celebrate our daughter Janae's birthday. Then in the evening they went with us to all night prayer and worship in Pass Rien. Kirsten and Carrie sang and played again. It was a great evening, pastor Rusty from CTK Anacortes preached and all of us thoroughly enjoyed worship. Pass Rein is my favorite church to go to for worship. Today Saturday, the team introduced themselves to the pastors and leaders at our pastor's conference. Then Rusty shared with them and encouraged them. Susan and Kirsten joined me to play with the children in play and prayer room. We are just about finished with the chicken pox, over half of the children have had the chicken pox now. Tomorrow Rusty will be preaching in Pass Rein and Mike will be preaching in Perou. Please be praying for open hearts and minds. Tomorrow evening we will be starting a week long crusade in the village of Myan. Please be praying for soft hearts and the moving of the Holy Spirit.

Now for a couple of stories. The first story is about a witch doctor. He actually is a boko, a boko is a witch doctor that is above other witch doctors. He called Nathan and asked if they could meet and talk. Nathan said that the man shared that he had become frustrated because he and the witch doctors under him in Pass Rien were unable to practice witchcraft, nothing they did was working. They were realizing that they had no powers left.  He admitted to Nathan that the powers of satan was less then the powers of Jesus. He then said that he wanted to know more about Jesus and gave his life to the Lord. I am sure the angles in heaven were praising!!!!!!!!!!!!!
The second story also takes place in Pass Rein, and it also is about a boko who is over other witch doctors. As we have shared before, the area of Pass Rein we minister in is called Deforce, which means place of darkness, the place where the witch doctors come from. The community of Deforce, Pass Rien has had so many salvations that the people in the community want to change the name of their village to Bon Berger. Bon Berger means Good Shepherd. They have started the process of the name change with the government. Anyway getting back to the story, this boko was having a voodoo ceremony, and like the other boko, he was becoming more and more frustrated because his powers were no longer working. During this particular ceremony he shared he was becoming extremely frustrated and all of the sudden there was a bright light. He said the light was so bright that he could not see anything else. He said that he asked the light "who are you Lord?" He said he heard a voice coming from the light that said "I am Jesus", so the next day he went to our church in Pass Rein and asked how he could know Jesus. God in his perfect way and perfect timing is changing the area from a place of darkness, that the witch doctors come from, to a place of light that God's people come from. It is truly a village that speaks of God's story of redemption and transformation. We feel so blessed to play a small part in God's plan.

Blessings and thank you for being a part of God's plan also.
Chris
0 comments