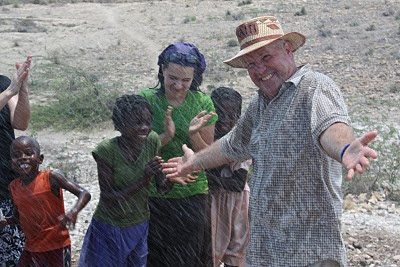 Finally we have water
0 comments 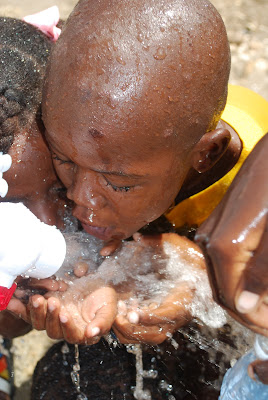 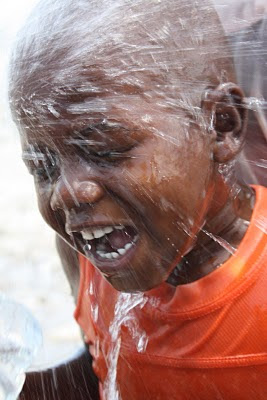 This picture pretty much says it all
0 comments

Naomi, Mike and Aumony
The two women who had the vision for the Water For Life Walk. 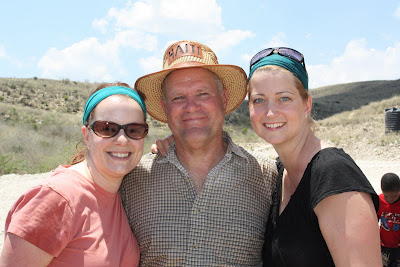 Last August, after hearing me share my testimony and what God was doing in New Generation Ministries to meet the needs of the orphan and the lost in Haiti, Two young women came to me and said that God would not leave them alone. “They just had to do something to help those children”. The Passion of God moved them to hold a “Water for Life” walk for other mothers with children and community members. The walk was successful beyond expectations. They raised over $9,000. We designated a fund for the money to be spent for the purpose of water for the orphanage only. Water is very hard to come by in Haiti. 80% of the existing water supply is not drinkable. And the people either walk many miles each day to find drinkable water or they drink bad water and sometimes are sick, and sometimes die because of it. In September the church held an outreach garage sale where the Best was sold to help the needy, both locally and globally. New generation was the recipient of a good portion of that money, and it was earmarked for the water system in Haiti. We promptly contacted another ministry that had a well driller in our area of Haiti, and although he had a two year backlog, he just felt led to move us up to the top of his list. We met on site to discuss the location of the well. The ground was rocky and there was no visible indication of signs of water, we decided to move ahead. On a hot day in November, a team from Lynden showed up with their rig to drill our well. With great anticipation we watched as they set up and began to drill. The first day went to 40’ with no results. The second day went to 70’ with no results. The team asked if they could drill the third day, even though it was Sunday. I told them yes, but they had to stop for church. I was preaching that morning in our local Haitian church with a translator. As I heard the boys come in, I stopped the service and explained to the congregation what the boys were up to and how desperately important it was. I brought the boys up front and asked the whole congregation to lay hands on them and pray for their success. Two hours later we hit water, a good flow of clean water. We all celebrated and praised God. We caped off the well for now, and made planes to come back in January with a proper pump and get things started then. But January brought one of the worst natural disasters in Haitian history and with it a devastating amount of destruction and loss of life. All of our efforts went immediately into relief mode, and for the most part, still are. Finally this last month of April, we took a small but hard working team with us to visit the orphanage. We installed the piping and the pump, and watched as the most amazing thing took place. Water, lots of good, clean water began to spray out over the dry land. The children were so excited, they stripped of their clothed and began running and dancing in it. We were all in it a few minutes later. It was life, real water for life, and we were dancing in it and praising God for what he had brought forth from the faithfulness of all the people who had contributed. Oh, and the other miracle that took place that afternoon, was that the same two women, that had so passionately come forth to get this whole thing started, had come with us on the team, and were there with us, dancing and praising and seeing the fruit of a God that brings to completion a good work that he has begun.

Hello,
We went to an orphan summit in Minneapolis last week, put on by Christian Alliance. At the summit we went to a session done by a Christian team that documents stories, their goal being to help bring change. They have documented a story on Haiti. It is told through the eyes of a former child slave and a 7 year old orphan. CNN is going to air this story on their news network. It is an hour long documentary and talks about God, Jesus and Faith. We were able to see two clips one of which has earthquake footage. It will air this Saturday, May 8th, 8-9 Eastern time. So it would be shown at 5 o'clock our time. Even though we have only seen part of this documentary we would encourage you to watch it.
Chris
0 comments