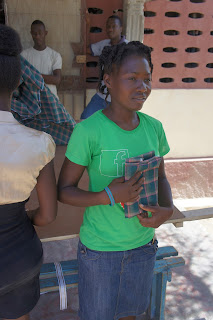 Fabric for the high school shirts 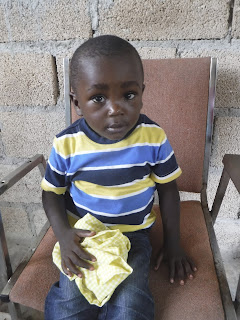 A new school shirt for the primary children 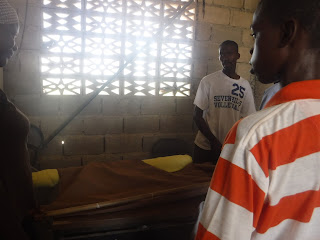 Measuring and cutting for school uniforms

Hope you are enjoying the fall season. The last couple of evenings here in Haiti have been in the 90's. Looking forward to a little bit of fall weather :)

I have bits and pieces of Haiti news to share with you. Tonight in Marose there were two salvations. Praise God! Also a very interesting thing is happening in Pass Rien. People have been coming forward who attended the crusade two weeks ago, and sharing that they have given their hearts to the Lord ! We have been told about 5 people giving their hearts to God after the crusade ended, all of which say they heard the Gospel message at the crusade, God works in ways that are entirely His, for the purpose of Glorifying Him :)

We want to send a huge thank you out to Bart and his friends from the men's group at Northwest Community Church. They raised enough funds for us to purchase a transformer so we can have power again. A novel idea after going 3 1/2 months without power. The power company here told us there were not enough people on the line to fix the old transformer, which blew because too many people were stealing power. So now thanks to Bart and friends, WE HAVE POWER :) I forget sometimes we have it, it has become a habit when it is dark to go grab a flashlight so I can keep working. The kids laugh and remind me to flip on the light switch :) God is good, he even cares about the little things. Our little refrigerator, which had become a fancy cupboard is cold again. We do not have to turn the generator on to use the internet. Although the power company installing the transformer, cut the internet line in 6 plus places, causing us to have power, but no internet for 9 days. But we have both now! And we are praising God for it.

Mary and Ian who have been with us for almost 3 months now have been a huge help with school start up. They have been at each school registration updating school photos. They have also been helping us get ready for the new school year. With books, shoes, uniforms, photos, tuition etc. This time of year for us is overwhelming in every way possible. We are so thankful for their help.

We also would love to give a huge thank you to Bob and Rose and their Mission store. This summer they raised enough funds  for the ministry to purchase a commercial copy machine. This has been huge in preparing for school. We have been printing materials for school and also for the the pastors training. We are so very grateful to all of the people who contributed to the Mission store. It has been such a blessing.

And now for the story. A week ago Mike needed to go to Port-au-Prince for meetings and supplies. It takes about 3 hours to get into the heart of Port-au-Prince and he was on a tight time frame, so he was not able to stop and eat until late in the afternoon. He was very hungry so he ate in the car as he drove, thoroughly enjoying his meal of chicken. As he was driving he started laughing at himself, thinking what it might  look like to others around him. As he pulled up to a traffic light, he saw a young boy begging from the median in the road. Mike reached out the truck window and gave the boy his meal. The boy looked quickly around to see if anyone saw. Usually there are people everywhere even in the middle of the road. But, there was no one. Mike watched him sit down on the curb and fold his hands to give God thanks before he began to eat. Mike drove away with tears in his eyes. Times like that are so precious.

Thanks and blessings for coming along side of us to help the people of Haiti.

Video wouldn't upload onto blog but you can see it if you follow this link. 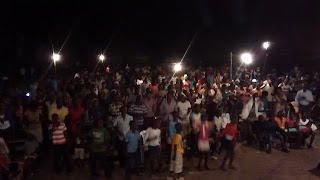 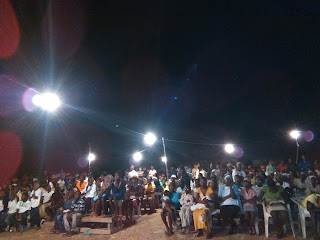 Saturday night at the crusade 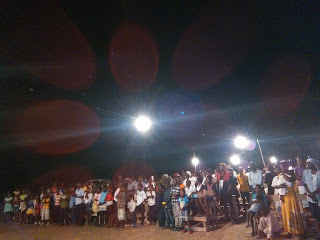 All on our feet, about to march and claim the field for Jesus 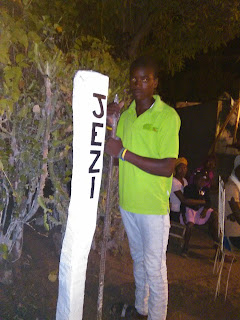 The stake in the ground, claiming the ground for JEZI (Jesus)

Wow GOD is so POWERFUL!

We wanted to thank all of you so very much for coming along side of us and fasting and praying for the Madame (witch doctor) and the crusade in Pass Rien. Your responses were encouraging and faith building. One of our friends is a Christian medical doctor and he felt like it was fitting for him to fast and pray, Christian doctor vs. witch doctor. Another one of our friends was having his birthday party and during the party had everyone stop and spend time in prayer. Another couple are vacationing in Europe and said they would spend time in prayer. So many of you were willing to give of yourselves.

The response of the Madame I do not know as of yet, but God does :) I do know the Holy Spirit moved powerfully last night. I will let you know as soon as I know more.

The response during the crusade was huge, your prayers moved kingdoms. We worshiped together first for a couple of hours. Then Mike preached. Near the end of his sermon a stake was driven into the ground claiming the soccer field for Jesus. This field has been used as a military type training ground for voodoo, and last night it was being claimed for Jesus. Then everyone at the crusade marched all over the field singing worship songs and claiming the ground for God. They marched and sang for over 1/2 hour. It was an amazing sight, seeing Christians marching together for Jesus felt like a glimpse into heaven. So very POWERFUL. After everyone finished marching, 13 young adults came forward and gave their lives to the Lord. So far this week there have been 38 salvations during the crusade.

This morning before we went to church 5 people who were not at the crusade called Nathan and asked what the white stake,with Jezi (Jesus) written on it was all about? It had not even been 12 hours yet! Thank you so very much for your sacrificial prayers and fasting.

Today, Mike felt like God was saying that Pass Rien was like a lamp stand to put a lamp on. A lamp stand where His light will shine from. His children do not get to chose the lamp stand. He chooses the lamp stand, and He has chosen Pass Rien.

Tonight is the last night of the crusade, we would appreciate your prayer once more.

A quick note to ask for prayers and fasting today (Saturday). Today I am going to be fasting for the madame (witch doctor) in Pass Rien. I normally would not share with anyone that I am fasting, but I would like it if you would join me. She has caused so many problems in Pass Rien and she is fighting against us, Nathan, his family, the ministry and the village of Pass Rien. I believe that Jesus wants her heart, would you please help by praying and fasting for her with us? I would love it if you would respond with a quick yes or something, so I know we are going to battle over her soul together. Jesus promises when two or more are gathered He hears our prayers.

We are so thankful for your prayers for the crusade, Thursday 5 more people accepted Jesus into their heart. Last night 5 women were delivered and many, many came forward for prayer. We also found out that voodoo witch doctors use this same soccer field Nathan felt called to hold the revival on, for practicing and teaching voodoo. They use the field like they would for military training. So tonight when Mike preaches we are going to ask the 700 plus attendees to help drive a stake in the ground for Jesus. We are going to be asking everyone to walk all over the property area and claim the ground back for God. Again, we would love it if you would agree in prayer together with us tonight. We need the power of prayer together to accomplish this. I wish you could be here standing with us, but we know God will honor your prayers to see his kingdom come to this area of Pass Rien. Thank you so, so much. 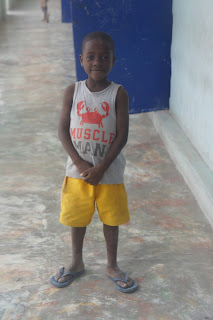 one of our little ones 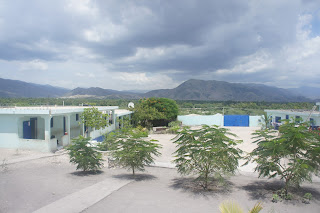 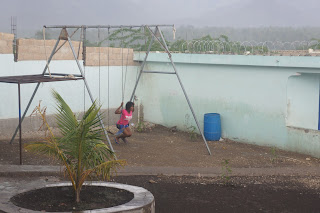 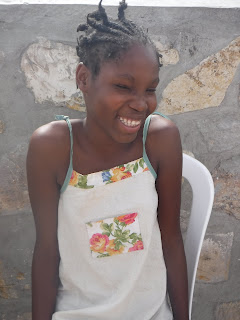 We wanted to update you on what is happening in Haiti. We have a huge revival going on in Pass Rein each night this week, through Sunday. We are holding this revival down the road about a mile from the church in a dirt soccer field, so that there is more room for the community to attend. Last night we had about 700 people. Typically each night more people attend. Please pray for the revival to reach new people in the community. We have had 21 salvation's so far. Revivals at Pass Rein are so much fun, everyone loves to worship and last night was no exception. You see people from every walk of life and every age. They bring blankets for the children to sleep on when they get tired. Last night it I was so blessed as I worshiped, a little ways in front of me I watched a little old women, she looked like she was at least 90 years old, but probably she was closer to 70 years old. She was dressed in a moo moo,  had a scarf on her head and held a walking stick. She was pretty bent over. But as worship progressed she started dancing for God and singing with everything she had. As she was lifting her arms up to praise God she was swinging her walking stick. That stick was just an extension of her dancing. She was so precious. I was so worried she would topple over, but I should have know her Jesus was holding her up. After that song ended, she stooped over and walked slowly, carefully back to her chair. I know she blessed God's heart, she had given her all. So precious and sweet, she didn't care what others thought, she was giving her gift to her Savior. And that was most likely after walking to the revival for a mile or so over rough terrain. I want to be like her when I grow up :)

Thank you so much for your faithful support, we depend on your prayer support.

Pure and genuine religion is this, to care for orphans & widows in their distress, & to refuse to let the world corrupt you. James 1:27