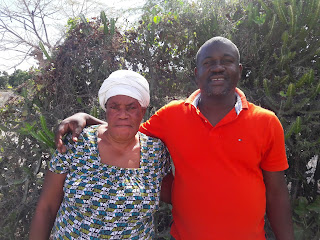 She's no longer a witch doctor 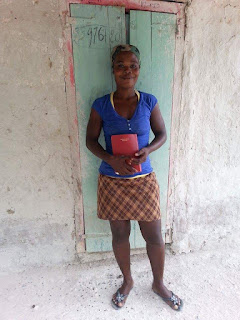 Hope you are all enjoying your spring break and a little warmer weather. It has been in the low 90's here off and on already.

The end of last week and this week we have been doing follow up in Badjo. We have been giving out some of the bibles you helped to purchase and encouraging the people to go to one of our other churches for now. This is a little more difficult for them, as it means walking a few miles to and from church, but some are doing this. We had 7 people from Badjo in our Marose church.

On the second evening of the crusade I noticed a young women slip in from the side road. I felt like God was unwrapping her heart in a spiritual sense. A couple of us prayed for her through out the evening. Later she went forward for prayer for healing and then again she went forward for salvation. The other day when getting a bible to her, we found out that she is living in a voodoo temple. We are now trying to figure out how we can help her find another place to live. This is just one example of the challenges that sometimes come about, as peoples lives are changed. Please pray for discernment as we try to work through the challenges of bringing new believers to Christ. Many times it is more complicated then it first appears. We need to look at each situation individually as they come, but in many cases we are setting a precedent for the future and need to carefully choose how and when we help. We really need your prayers for discernment.

On Thursday evening we showed "over the hedge", a kids movie in french at the Marose church to the youth group. The movie attracted a lot of teens from the community. We served popcorn and water also. Afterwards we sang a few songs and Nathan shared why we were reaching out to them. Some came forward for healing and 2 older teen boys came forward and wanted to accept Jesus. All from a fun kids movie night. God is amazing.

For Easter week this year Nathan, Mike and each of the pastors in our ministry are rotating each evening and preaching at a different church. This way each evening every church in our ministry will have a different pastor share with them. Usually it is just Nathan and Mike that change which church they preach at. Please pray for each of them that the Holy Spirit guides them and goes before them.

We are so thankful and appreciative of the support you give us. It allows us to be able to minister here in Haiti, to be the hands and feet of Jesus.

Many blessings and happy Easter,

Passing out rice to the hurting families of Badjo 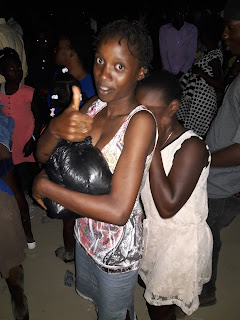 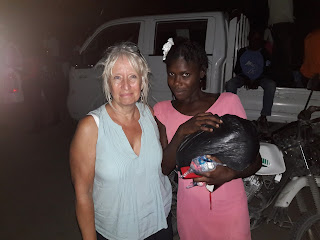 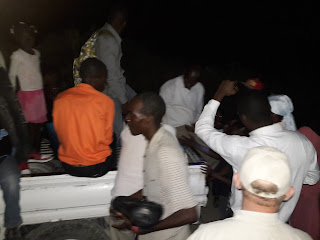 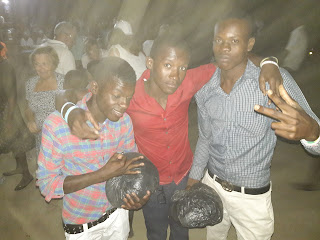 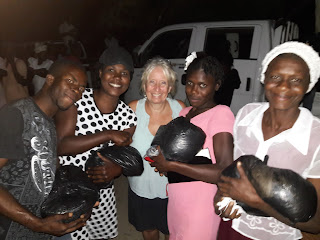 We wanted to send out a prayer request and update you on the crusades in Badjo and the team.

The team has been doing great. Jay preached in Badjo Saturday evening and then again Sunday morning in Bon Berger, Pass Rein. Jay also shared during the pastors conference Saturday morning. Kim and Melissa along with three of our older boys from the Children's village painted a mural on one of the walls in the Prayer and Play room. I have been wanting a mural in the Prayer and Play room since the beginning. So I was very excited that they wanted to paint one.

The crusade in Badjo was great. We had 33 salvations the first evening, 5 salvations the second evening and 7 the third evening. This brings the total number of salvations in Badjo to 88 in just the three weeks since the accident. Thank you so much for being a part of the salvations by praying. People also came forward for healing and being set free. One of the hardest parts was calling the younger children forward who had lost parents in the rara bus accident. We prayed over them and it was very emotional and so hard to see the suffering.

There were some distinct differences during this crusade, even more significant than the amazing number of salvations was the intense feeling of spiritual warfare for this area. In comparison the spiritual battle in Pass Rein felt like hand to hand combat and the spiritual battle in Badjo, Mapou and Lakou feels more like heavy artillery.  On Saturday evening there were some groups of people gathered on the road, outside of the property the crusade was on, just watching, but not participating. This in its self was not unusual. But, there was a man watching from the sidelines who happens to be a Boko who we have found out is considered even higher in power then the madame from Bon Berger, Pass Rein. They know each other, and we have been told that he knows that we helped to bring God and Jesus and the change to Bon Berger, Pass Rein and he is furious that we have begun to do the same in Badjo, Mapou and Lakou. He is very powerful and has influence within Haiti's government, including with the president. Sunday evening, the last night of our crusade he was able to get the president of Haiti to have police block off the traffic going over the bridge on the only highway to Cap Haitian. This blockade  was so that the villages of Badjo, Mapou and Lakou could hold rara's in the same area the bus took the lives of 46 people. So we drove through the river to get to the crusade instead of crossing over the bridge. In spite of holding a huge rara at the same time as our crusade we had twice as many people in attendance as the previous two nights. This man's name is Ti Lili. There is a man that works closely with him named Jacks. Please pray for their salvation.

We believe that prayer was the catalyst that ushered in the kingdom of God in Bon Berger, Pass Rein. Jesus put Bon Berger, Pass Rein on our hearts, on your heart and on the hearts of people all over the world praying with us. We believe the power of prayer changed the village of Pass Rein. Mike shared with the people that voodoo had blinded them to the open door that they were not able to see before. Please pray for the people to see the door and choose Jesus.

Sunday evening at the close of the crusade the team helped to  pass out rice to each of the hurting families in Badjo. I will try to post some photos.